The Graph Theory in the Open Street web application

This page explains how the Open Street service uses mathematical tools, such as graph theories, to describe the problems of the commercial traveler hidden behind each optimization calculation.

It allows you to model and then solve problems as you enter them into our service or our APIs. Let us take the example of a journey to pass through Paris, Marseille, Lyon and Toulouse.

This four-city route is the simplest example possible, which can be described by a graph composed of nodes and links. Here the nodes are represented in blue disks and the links in black lines. 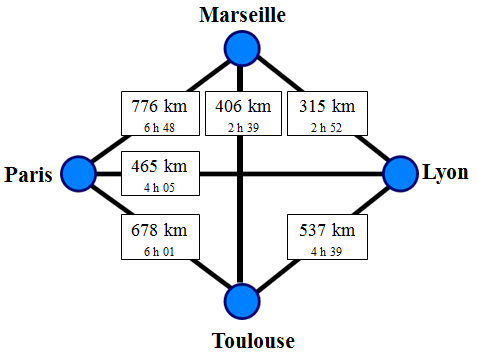 The graph above is very simplified because in practice, all the links are double. Indeed, the distance between Paris and Toulouse is not exactly the same as that between Toulouse and Paris, mainly because of the forbidden directions and asymmetric motorway junctions. We say in this case that the graph is «oriented ».

Thus, the combinatorics indicate that there are 24 different path possibilities. By fixing a city as a starting point, this figure drops to 6.

For such a small number of cities, one can easily visualize these 6 possibilities. It’s a 6 by 4 chart.

The table representation would have 40 columns and 2 1046 lines. Comparing all these possibilities with the world’s most powerful computer would take centuries. In practice, it is impossible from only a few tens of cities.

Table of possibilities for an optimization of 40 points

However, the Open Street service can optimize routes to several thousand cities. You will know, we do not try to compare all the possible routes, but we use much more elaborate algorithms which benefits you.